Messenger pigeons are a domestic breed derived from the common rock pigeon, bred selectively for its ability to find its way home over a long distance. They are believed to use magnetoreception, which is a sense using the detection of the earth’s magnetic field for navigation. During wars, homing pigeons were used for their service in carrying messages as messenger pigeons.

Research has been performed with the intention of determining the cause of homing pigeons’ navigational ability to find their way back to far-distanced locations after being transported to places they’ve never visited before. Scientists discovered that there was a large number of iron particles on the top of their beaks, which acted as a compass aligned for determining their home. Some research suggests that homing pigeons use low-frequency sound for their navigation. It was observed that sound waves as low as 0.1 Hz disrupted or redirected pigeon navigation. The ear of a pigeon is too small to interpret such long waves, directing them to circle around after first taking flight, in order to mentally map such long low-frequency waves.

Pigeons use landmarks to guide them as well. Other research indicates that some pigeons navigate with the guidance of man-made features, like roads, and making 90-degree turns and following habitual routes which are mentally marked for their navigation. According to GPS studies, gravitational anomalies also play a role in their navigation.

As postal carriers, homing pigeons were able to carry as much as 2.5 oz on their backs. A German apothecary named Julius Gustav Neubronner was known to use pigeons for delivering urgent medication. In 1977 a carrier pigeon service was set up between two English hospitals, for the transportation of laboratory specimens. Until the closure of one of the hospitals in 1983, the 30 carrier pigeons were used to deliver unbreakable vials back to Plymouth. A similar system existed in the 1980’s between two French hospitals, located in Avranche and Granville.

Birds were used extensively during World War I and World War II. Among the pigeons used during war were the Irish pigeon, Paddy, the American G. I. Joe and the English Mary of Exeter, all of which were awarded the Dickin Medal. Cher Ami, a homing pigeon used during WWI, was famous for delivering 12 important messages despite serious injuries. Birds were of vital use in the Invasion of Normandy, as radios could not be used for fear of interception from the enemy. 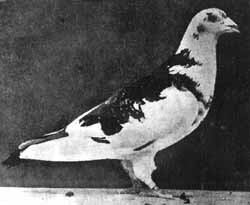