Sled dogs were significant for transportation in arctic areas such as Canada and Alaska, pulling loads when other forms of conveyances were unavailable. They were especially active helpers during the Alaskan gold rush and the explorations of both the North and South Poles. In rural communities, sled dogs were frequently used to deliver mail where it was less easy to do so in any other way. However, though sled dogs are still used in Alaska, Canada, Siberia, Lapland, etc., and throughout Greenland, their most popular occupation is during recreational activities and sports, especially sled dog racing such as the Yukon Quest and the Iditarod Trail.
The Iditarod Trail is an annual sled dog race which runs over a thousand miles from Anchorage to Nome. The race is run in early March, entirely within Alaska, and had begun in 1973 for the purpose of testing the best sled dog mushers and teams, since then evolving into a competitive race that runs for entertainment. The Iditarod Trail consists of mushers and a team of sixteen sled dogs, at least five of which are supposed to be on the towline during the finish, who may cover the distance in eight to fifteen days; they generally race through blizzards, subzero temperature, and weather that can cause the windchill to reach –100 °F. 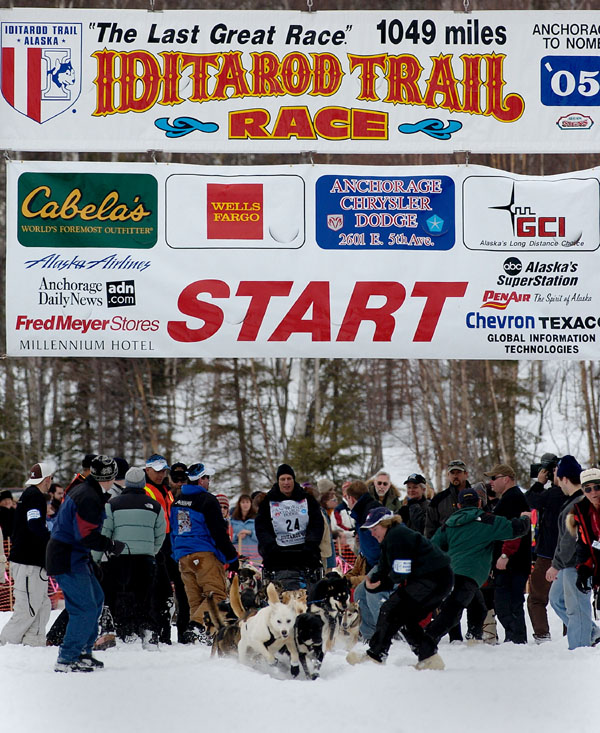 The modern racing sled is generally lightweight and flexible, usually built from ash laced together by nylon and leather, and the musher (driver) can use a foot brake which uses claws to dig into the snow as well as a pronged metal claw called a snow hook which can temporarily keep the sled dogs stationary. They can also use booties to protect the sled dogs’ feet from adverse trail conditions or for extra protection from previously injured paws; booties are rectangular socks secured by a length of Velcro, made from light and durable material such as fleece, which are made to slip over each paw. Mushers may utilize handlers to assist in the care of their sled team, but usually the mushers hold themselves responsible for the general feeding and training of their dogs, fostering a better sense of kinship and trust between them.
When the musher shouts Gee or Haw, meaning the order for a right or left turn, the sled dog leaders who understand such commands are referred to as command leaders, or gee/haw leaders. Nevertheless, some dogs who don’t understand these commands are used as leaders anyway, based on their instinctive ability to find trails even in snow-blown country. Directly behind the lead dogs are the backup leaders who assist the leaders in their tasks, called point or swing dogs. Behind the swing dogs, directly ahead of the sled, are the wheel dogs; because the wheel dogs were used to help the musher keep a heavy load on the trail, they were traditionally chosen as larger dogs. All dogs who run between the swing dogs and the wheel dogs are referred to as team dogs, being the ones who produce the endurance and power to actually pull the sled.

Sled dogs are typically Siberian or Alaskan Huskies, Alaskan Malamutes, Samoyeds, Chinooks, Canadian Eskimo dogs, or Greenland dogs. The Alaskan Husky is the breed most commonly used for dog sled racing, and Malamutes were the dogs of choice chosen for hauling and messenger work in World War II. Canadian Eskimo dogs were also used to help Inuit hunters catch seals, Muskoxen, and Polar bears, and the Chinook breed was developed as a drafting and sled dog in New Hampshire. Greenland dogs, of which there are more than 30,000 living in Greenland, are a primary mode of transportation during the winter; most Greenland hunters favor them above snowmachines because they were more reliable.
Among famous sled dogs are Togo, Balto, and Anna, and there are numerous stories of blind dogs who persist to run despite their deprivations.