The Russian Blue is a popular cat breed whose dense coat comes in colors varying from light silver to dark grey; they are often sought out as pets because of their personalities and beauty. Russian Blues have emerald green eyes and what is described as ‘plush short-haired, shimmering blue-gray’ fur.
The Russian Blue is a landrace, a naturally occurring breed, which is thought to have originated in the port of Arkhangelsk in Russia (They are also called Archangel Blues; Arkhangelsk in English means ‘Archangel’). Sailors are believed to have taken Russian Blues to Great Britain and Northern Europe in the 1860s. The appearance first recorded outside of Russia was at the Crystal Palace (Hyde Park, London) in 1875, as the Archangel Cat. The Russian Blue competed in a class featuring all other blue cats until 1912, when it was granted its own class. Until after WWII, the breed was developed mostly in England and Scandinavia. 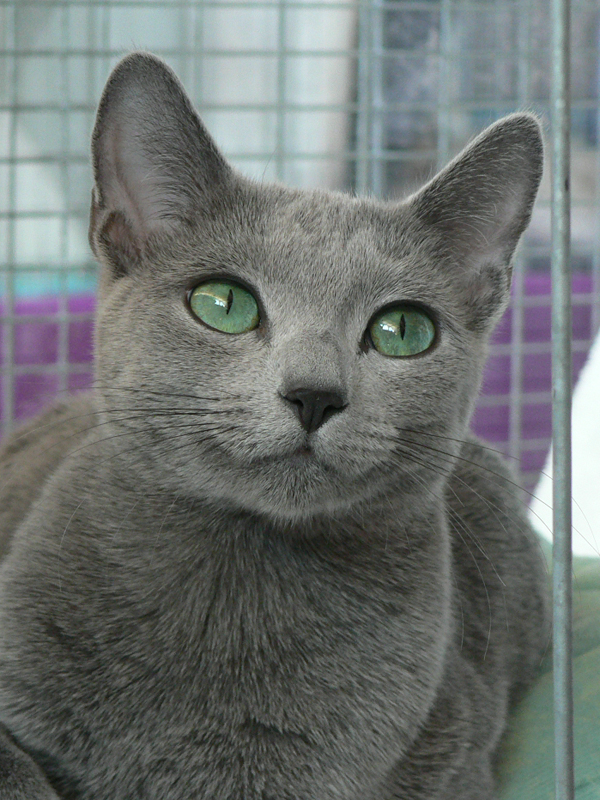 Right after the war, a lack of numbers of Russian Blues led to their crossbreeding with Siamese cats. Russian Blues were in the US before the war, but it was not until the post-war period that American breeders created the modern Russian Blue that is now seen in the world today. American breeders combined the bloodlines of both the Scandinavian and British Russian Blues. The Siamese traits have now been largely bred out. The short fur and slate-gray/blue colors are oftentimes seen in mixed-breed cats, which can affect breeders and showers to mistaking a cat for a Russian Blue.
Russian Blues get their silvery, lustrous sheen from their distinctly silver-tipped guard hairs. They have been used on a limited basis to create other breeds such as the Havana Brown or alter already existing breeds such as the Nebelung. They are also being used in Italy as a way to make Oriental Shorthairs more healthy and robust.

Russian Blues are described to have pinkish-lavender or mauve paws, and the coat is known as a ‘double coat’, with the undercoat being soft and downy and as long as the guard hairs, which are a solid blue with silver tips. However, their tails may have a few very dull, inconspicuous stripes. The coat is described as thick, plush and soft to the touch. The feeling is softer than the softest silk. The silver tips give the coat a shimmering appearance, and its eyes are almost always dark and vivid green. Any white patches of fur or yellow eyes in adulthood are seen as flaws in show cats (As kittens, however, their eyes are yellow with green rims).
Russian Blues are curious, tranquil, friendly, and intelligent. They are known to play fetch, open doors, and be sensitive to human emotions. They develop close bonds with loved ones and other family pets and enjoy playing with varieties of toys. Russian Blues are generally considered to be a quiet breed, though there can be exceptions, and are usually reserved around strangers unless brought up in an active household. They are clean animals and fierce hunters and can be trained to do tricks.

Russian Blue kittens require adequate playmates and toys; they become mischevious when they are bored. They are exceptionally athletic and best even Abyssinians with their ability to leap and climb. Russian Blues are slow to mature and may retain many of their adolescent traits until three to four years of age, but even old Russian Blues can easily be enticed to play. Not only are they very intelligent, as mentioned before, but they have a great memory; they are keen to remember favorite visitors and will rush to greet familiar faces.
Overall, Russian Blues have a life expectancy of around ten to twenty years, though some have lived up to twenty-five. They have few health problems, are not prone to illness, and have little or no genetic problems. They are small or moderate-sized cats and males are typically larger than females. They are fast, slender, fine-boned and strong, though their thick fur often hides the muscular frame and might give them a slightly more robust look. They have triangular-shaped heads with large ears and a natural ‘smile’.

Russian Blues are recommended as great pets for both looks and personality.