A silver fox is a melanistic form of the red fox; they represent maybe 10% of the red fox population. They have white-tipped tails and fur coloration that varies from black to silver to bluish-grey. Silver hairs are widely scattered over their coats. Their fur is soft and glossy and the soles of their feet are thickly coated. Historically, silver foxes are some of the most valued furbearers, and their skins were worn frequently by nobles in Russia, Western Europe, and China. Their pelts are prized in the fur industry, and they are raised on farms for fur production. They have thick, dark undercoats, and overcoats that are maybe two inches longer than their undercoats. Wild silver foxes can be littermates with the common red variety, but captive silver foxes who are bred for their fur and as pets are exclusively mated to members of the same color. 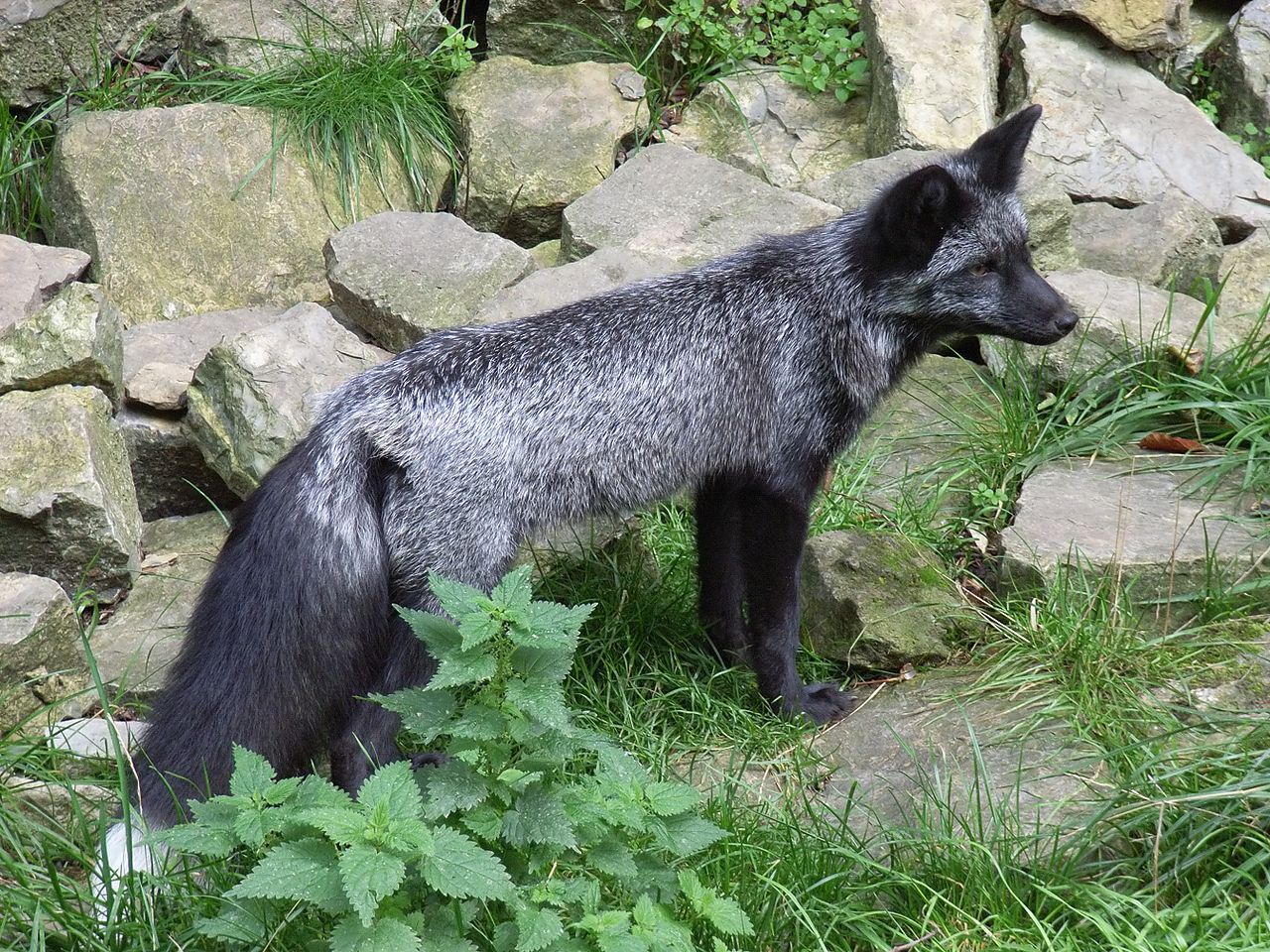 In captivity, red foxes live up to ten or twelve years, but in the wild, their age is often reduced to three or five. They may range from seventeen to thirty-five inches long, with a tail from twelve to twenty-two inches long; they weigh from six to over twenty pounds, and males are usually larger than females. Their fur was once reputed to be finer than that of the European pine marten, but it is a little coarser and woollier around the tail. It is the shortest around the limbs and face, and is finer and wavier on the belly; their ears are thickly clothed with fur, but there are hardly any long hairs there. Silver foxes also tend to be more cautious than red ones.
When a fiery red fox mates with a silver fox, their offspring are usually 50% red and 50% silver. Occasionally the colors of mixed foxes blend rather than segregate, producing the breed of fox called a cross fox. 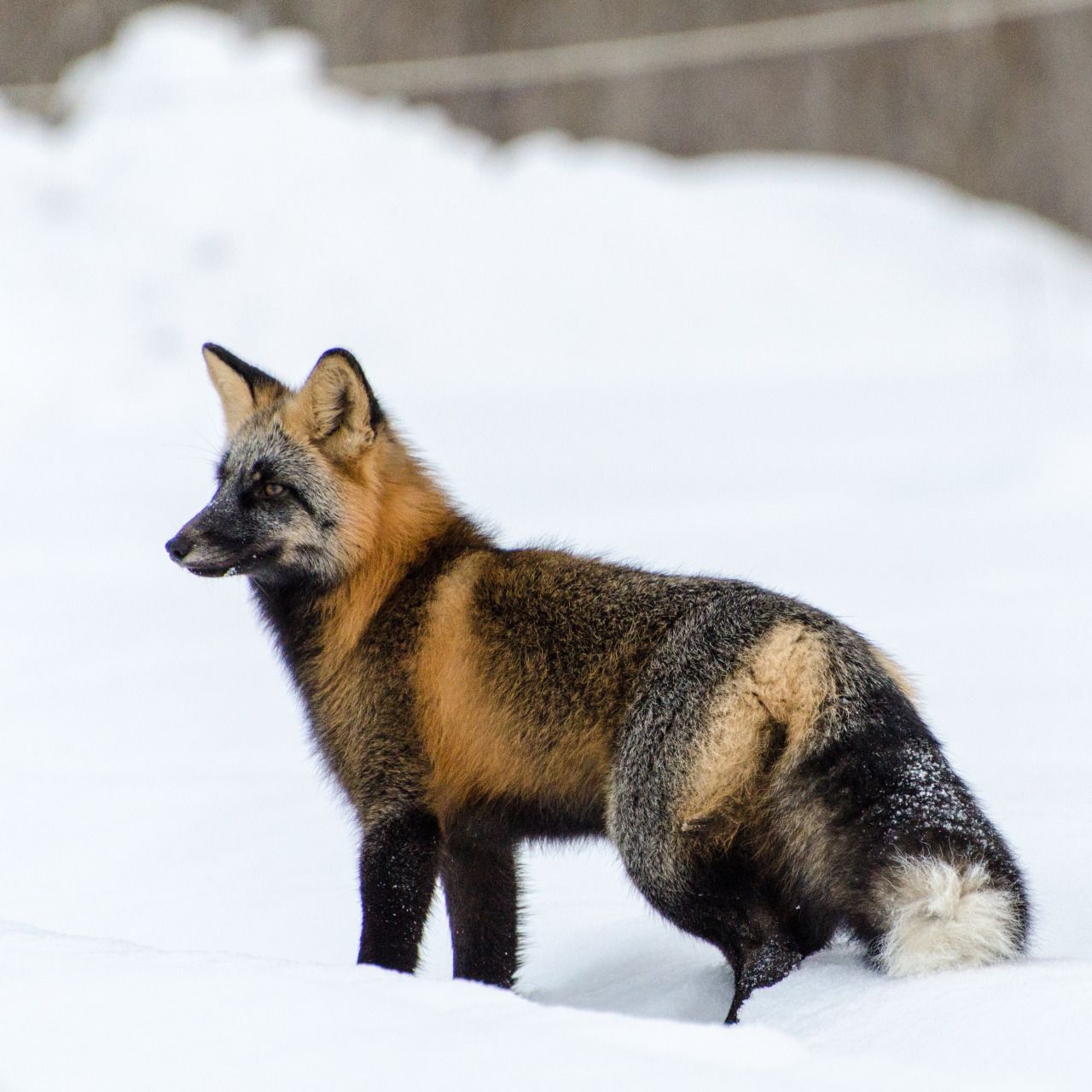 Silver foxes prefer a carnivorous diet, but they can rely on plant material when meat is scarce; they are opportunistic hunters and eaters. In the wild, they use different strategies to hunt different prey. When they are hunting small prey, they first use sound to locate it and then spring, pin the victim to the ground, and kill it with a bite. They rely on stalking and rapid pursuit to hunt larger ground prey.
Red foxes, including the silver fox form, are one of the most widely distributed carnivorous species in the world, ranging over much of the northern hemisphere and even Australia. Humans introduced them to many habitats for the purpose of hunting. In North America, they are usually found in the Northwest, although, historically, they were trapped in the East. In Russia, they are found predominantly in Siberia and the Caucasus mountain region. In the 19th century, silver foxes were sometimes collected from Labrador, the Magdalen Islands, and sometimes but rarely from the mountainous regions of Pennsylvania and the wilder portion of New York. They were occasionally found in Novia Scotia. According to a naturalist and arctic explorer named Sir John Richardson, it was uncommon for trappers to collect more than four to five silver foxes in a season. They compromise up to 8% of Canada’s red fox population.

Silver fox litters can range from one to fourteen pups but average about three or six. The males will help provide food and protect the den, and other unmated females may help raise a large litter. Larger litters occur when food is abundant and when the mother is more mature. Pups remain with their mother until their first autumn; they venture outside the den at four to five weeks of age and are weaned when they are eight or ten weeks old. Males and females are generally seasonally monogamous, and gestation is about fifty-two days. In the wild, silver foxes can mate with other red foxes, or cross foxes, and are not usually limited to breeding with foxes of their own color. Mating occurs once a year, usually in January and February. Domestication of the red fox has produced the silver fox, which is often referred to as the Siberian fox. This domestication is due to selective breeding, resulting in tamer and more dog-like foxes.
The domestication began in the Soviet Union and Russia in 1959 and has occurred for over fifty years of experimentation. Some of the observed behavioral traits include tail-wagging when happy, barking and vocalization, and ear-floppiness, which is usually a character observed in domesticated dogs. The project was originally intended to show how selection can work with aggression and behavioral traits, and be further extrapolated to show that dogs could be domesticated from wolves.
Silver foxes appear in the stories of many cultures. The Achomowi people from Northern California tell a myth about two creators, a wise silver fox originating from the fog and a trickster coyote stemming from the clouds. The story was a moral lesson, portraying the silver fox as a wise creator and the coyote as a lazy and impulsive animal. Silver foxes have similarly been represented on totem poles.

Eyes like shining amber raindrops,
Shadows as black as the night,
Silver flashes between trees and crops,
Devoid of sorrow and fright.
And just like the dawning sun will rise,
So will the soul that never dies.