Ocelots are wild cats native to southwestern United States, Mexico, Central and South America. The population is considered stable, estimated to compromise more than 40,000 mature individuals; it is listed as Least Concern on the IUCN Red List, and though its fur was once considered particularly valuable, legal trade of ocelot pelts stopped several decades ago. In the US, ocelots inhabit mostly southern Texas and southern Arizona.

The jaguar is larger and heavier and has rosettes instead of the spots and stripes of the ocelot. Ocelots are often confused with margays, but they can be distinguished by being twice as heavy, with a shorter tail and smaller eyes relative to the size of the head. They also have a greater head-and-body length than the margay and are a similar size to the bobcat.
Richard Lydekker, an English naturalist, once said that the ocelot was “one of the most difficult members of the feline family to describe.” But in 1929, Ernest Thompson Seton gave a description for the coat of the ocelot that I think is very fitting: “….The most wonderful tangle of stripes, bars, chains, spots, dots and smudges….which look as though they were put on as the animal ran by.”

Ocelots have solid black markings on fur that is creamy, yellowish, tawny, and reddish grey or grey. They have small spots on the head and limbs, but the markings on the back, cheeks, and flanks are open or closed bands and stripes. Several dark stripes run from the nape to the tip of the tail, and its neck and undersides are white. There are a few horizontal streaks on the inside of the legs, and its ears, which are round, are marked with a bright white spot. Ocelots have brown eyes, but they reflect golden when illuminated. They weigh 24 to 35 pounds and have 28 to 30 teeth, with a 25.5 to 41 cm long tail and short fur. They are twice the size of the average house cat.

Ocelots are largely nocturnal, active mostly at twilight and in the night. They do not avoid water, like many cats, and they swim well; they take to the trees often, to hunt monkeys and birds. They have keen sight and hearing, and their carnivorous diet consists mostly of rodents–such as rabbits–and frogs, iguanas, and fish. They are adapted for eating meat, with sharp back teeth that can tear food like scissors and pointed fangs which they use to deliver a killing bite. However, their teeth aren’t appropriate for chewing, so they first tear their food to pieces and then swallow it whole, using their raspy tongues to clean off every last bit of meat from the bones.
Ocelots often live in the leafy canopies of rainforests, but they can adapt to human habitats and are sometimes found in the vicinity of villages and other settlements. Female ocelots have litters of two or three darkly colored cubs; in northern locations, they den in the autumn, but in tropical climes, the breeding season may not be fixed. 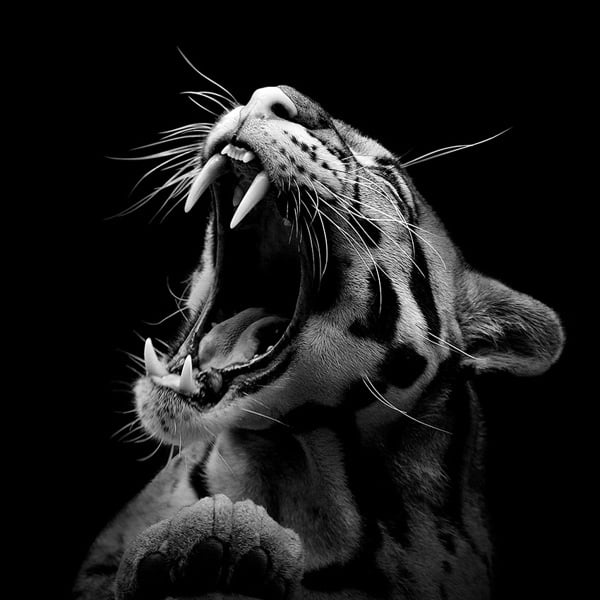 Black and white photograph of an ocelot