It’s almost March now, so I thought it would be a good idea to write another post. I’ve seen people walk Dalmatians past my house several times now, so…here it is. 🙂

Dalmatians are dignified, smart, and outgoing dogs, devoid of shyness; they are bright and loyal and are good watchdogs, hunters and show dogs. The Dalmatian is a popular breed of dog recognized for its unique black or liver-spotted coat. In early days, they were typically used as carriage dogs, which are dogs trained to trot alongside carriages and protect the occupants; the term ‘carriage dogs’ usually refers to a type rather than a breed. Dalmatians are widespread family pets and are often entered into dog show competitions by dog enthusiasts. The roots of the Dalmatians trace back to Croatia, and the historical region of Dalmatia. 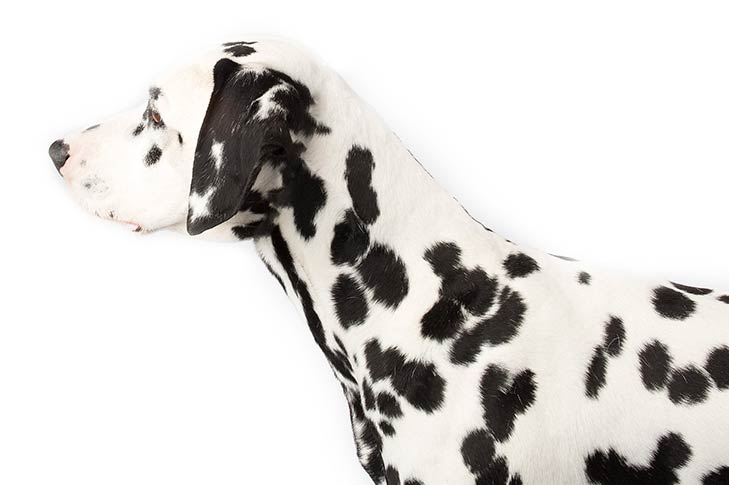 Dalmatians are muscular, medium-sized dogs that have excellent stamina and endurance. Males are usually larger than females, and according to AKC breed standards, fully grown adult Dalmatians stand from 19 to 23 inches tall. If you have seen the movie that widely popularized the breed (101 Dalmatians), then you know that they are born white and spotless. Their feet are round, with arched toes and nails that are usually white or the same color as their spots. Dalmatians’s eye color varies from brown to amber to blue, with some having multi-colored eyes. They have thin ears that taper towards the tips and are set fairly high and close to the head. 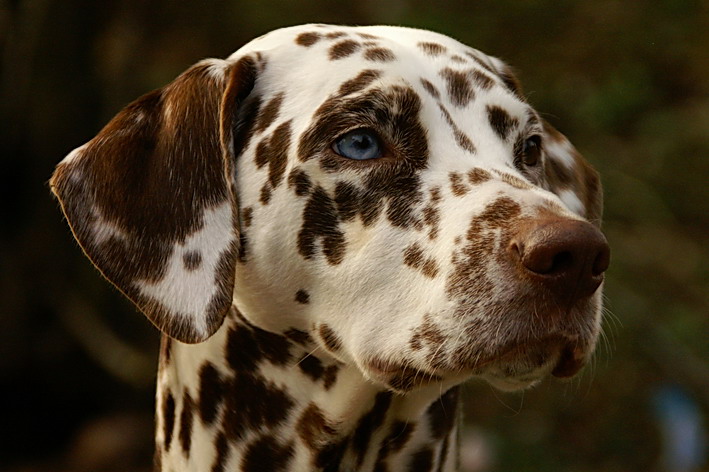 The first spots usually appear 3 to 4 weeks after birth; however, spots are visible on the skin. After about a month, most of the spots are there, though they continue to develop at a much slower rate throughout their lives. Spots are commonly black or brown, but there are other, more rare spot colors that include orange, lemon, brindle, mosaic, bluish-grey, or tricolor-ed, with tan spotting on the eyebrows, cheeks, legs, and chest.

The coats of Dalmatians are usually short and dense and fine; however, smooth-coated dogs can occasionally produce long-furred offspring. Long-coated Dalmatians are not acceptable in the breed standard, and they shed much less than the short-coated kind, which shed considerably all year-round. The short and stiff hairs of this variety often weave into clothing and fabric such as carpets and upholstery and can be difficult to remove. Nothing can completely prevent the shedding, but the amount of hair Dalmatians shed can be lessened by weekly grooming with a hound-mitt or curry. Dalmatians lack a dog odor, because of the minimal amount of oil in their coats, and they stay fairly clean relative to many other breeds of dogs.

They usually have litters of six to nine pups, but larger litters have been born on occasion, such as a litter of eighteen healthy puppies that were born in January 2009. 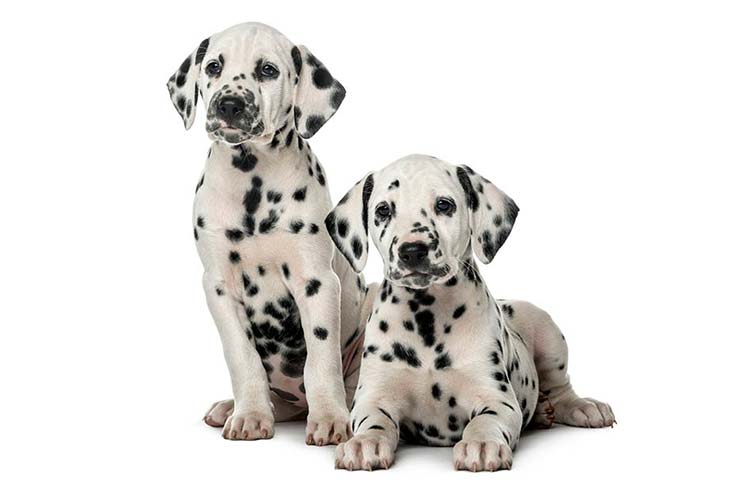 The first illustrations of Dalmatians have been found in Croatia; an altar painting in Veli Losinj (1600–1630) and a fresco in Zaostrog. The first documented descriptions of the breed trace back to the 18th century, and it was mentioned and described in church chronicles in 1719 and 1739. In 1771, Thomas Pennant described the breed in his book Synopsis of Quadrupeds, writing that its origin was from Dalmatia, and thus referring to it as the ‘Dalmatian’. Thomas Bewick’s book, A General History of Quadrupeds (published 1790) refers to the breed as the Dalmatian, or Coach Dog.

During the Regency period, the Dalmatian became a status symbol, trotting alongside horse-drawn carriages; those with decorative spotting on their coats were highly prized. For this, the breed earned the epithet ‘The Spotted Coach Dog’. They were also used to guard stables at night. 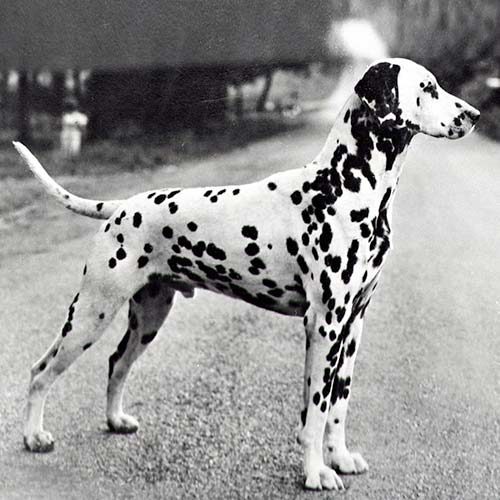 The breed was developed and cultivated chiefly in England. The roles of this ancient breed differ largely: they were used as dogs of war guarding the border of Dalmatia, and to this day the breed retains a high guarding instinct. Though friendly and loyal towards familiar dogs and people that they trust, they remain aloof of strangers and unknown dogs and other animals. They also have strong hunting instincts and are good exterminators of rats and vermin. Their dramatic markings and intelligence have made them successful circus dogs throughout the years, and also in sporting. They have been used in packs of wild boar or stag hunting, and as bird dogs, trail hounds, and retrievers. 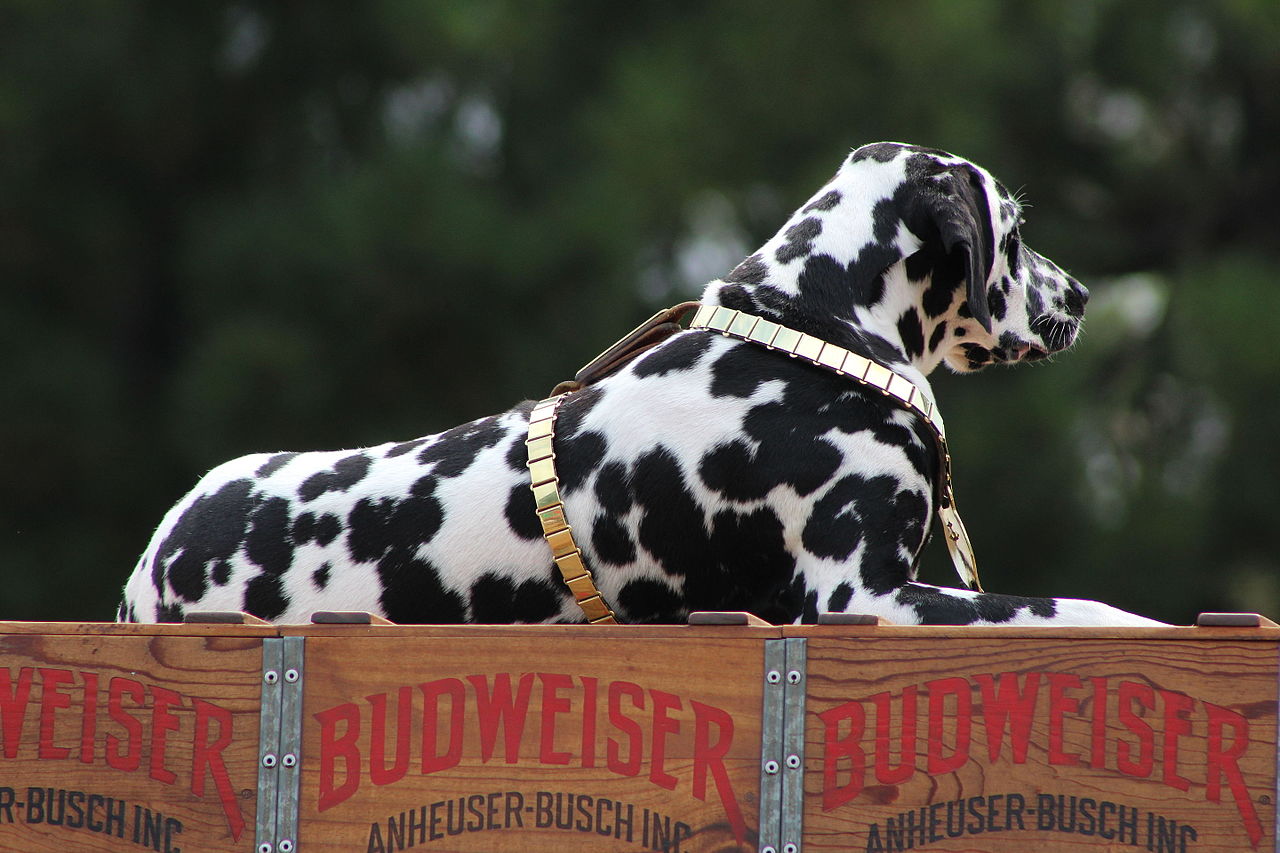 However, Dalmatians are probably best known for their roles in working for firefighters, as firehouse mascots and escorts of firefighter vehicles. Because Dalmatians and horses are very compatible, the dogs have been easily trained to run in front of the carriages, to clear the path and guide the horses and firefighters quickly toward the fires. Their role in this became unnecessary once horse-drawn fire engines were replaced with steam and diesel powered ones, but they were also used to guard the horses, which would easily become uncomfortable at the scene of the fire. They are also considered great watchdogs, and so they are sometimes posted as guard dogs to protect the firehouses and their equipment; they are sometimes kept in the firehouses as a deterrence to theft, because fire engines that used to be drawn by fast, powerful horses were tempting targets to thieves.

Dalmatians can suffer from hip dysplasia, hyperuricemia, and deafness. The average lifespan of a Dalmatian is between 11 and 13 years, according to the Dalmatian Club of America, and they are a relatively healthy and easy to keep breed. However, in their late teens both males and females may suffer from bone spurs and arthritic conditions. One of the biggest problems is a hearing loss; early breeders did not recognize the deafness, so they thought that the breed was unintelligent. Only about 70% have normal hearing. Deafness in piebald and albino animals is caused by the absence of mature melanocytes in the inner ear; breeders with a good reputation have their puppies tested to ensure the status of their hearing.