Description:
Grey foxes are small and secretive canines, and the only member of the family that can climb trees. They are sometimes mistaken for red foxes. However, grey foxes are slightly smaller, with shorter legs, and have coarse, salt-and-pepper grey hair. They have black markings on the head, nose, and muzzle, and a medial black stripe down the top surface of the tail (which has a black tip, instead of a white tip like red foxes). Grey foxes display white on the ears, chest, throat, belly, and hind legs. They lack ‘black stockings’, which differentiates them from red foxes. Grey foxes have strong necks and oval pupils instead of slit-like pupils, in contrast to all Vulpes and related. The females are slightly smaller than the males.

Weight:
Around 6 – 15 pounds. Males are slightly heavier than females.

Height:
About 14″ at the shoulder. Overall body length is up to 47 inches.

Geographic range:
Southern Canada to northern Venezuela (South America), excluding the northwestern United States. They are the only canids whose natural range spans both North and South America.

Status:
Grey foxes are fairly common in the southeastern counties of MN.

Habitat:
The species occurs throughout rocky, woody, brushy regions; in some areas, high population densities exist near brush-covered bluffs. They live in woodlands and forests (they are most likely to be found in deciduous forest areas), abandoned hay fields, pastures, and thick shrubs (they are often found in areas with thick brush). They also inhabit swamp areas and thickets. 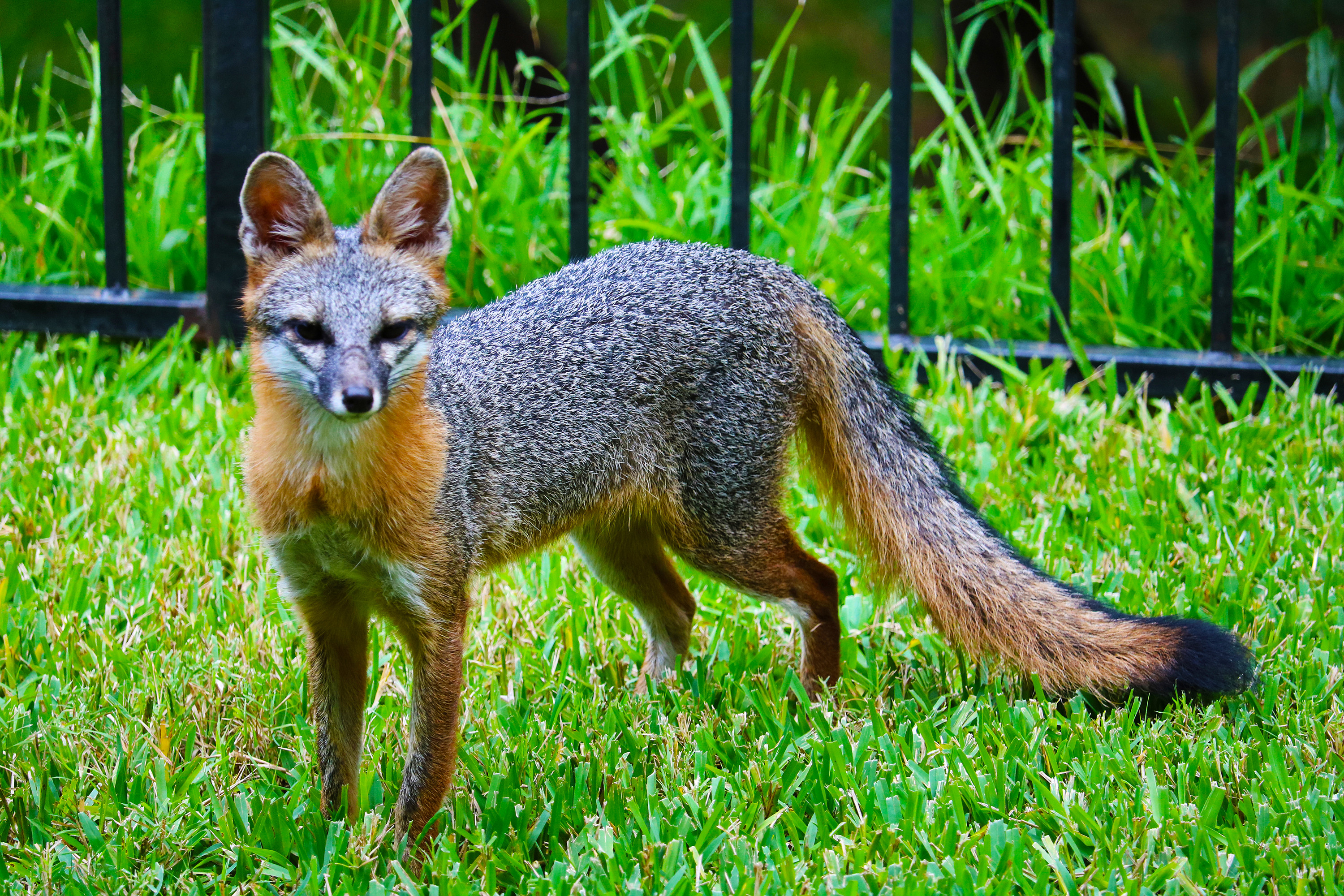 Behavior:
Among canids, the grey fox’s ability to climb trees is shared only with the Asian raccoon dog. Because of this, they are sometimes called ‘tree foxes’, or ‘cat foxes’. Their strong, hooked claws allow them to scramble up trees, whether to escape predators such as the domestic dog and the coyote, or to reach tree-bound food sources, or simply to rest. They can climb branchless, vertical trunks up to heights of eighteen meters and jump from branch to branch. To climb trees, they rotate their forearms, enabling them to hug the tree, while pushing forward with their hind legs. Going down is a little trickier than going up. It’s either a slow and careful tail-first descent (like a bear or a cat) or, if the angle isn’t too steep, a speedy headfirst downward run. A low center of gravity and four well-clawed feet make the latter option less scary than it sounds. 🙂 Grey foxes are primarily nocturnal or crepuscular (but may forage during the day), and they make their dens in hollow trees, stumps, or appropriated burrows during daytime. Such tree dens may be located 30 feet above the ground. Prior to European colonization of North America, red foxes were found primarily in boreal forest and grey foxes in deciduous forest, but now red foxes are dominant in most of the eastern United States, since they are the more adaptable species to development and urbanization. In areas where both red and grey foxes exist, grey foxes are dominant.

Reproduction:
Grey foxes are assumed monogamous. The peak breeding period for grey foxes is in early March, but the breeding season lasts from January through May. Litter size ranges from 1 to 7 pups, with 3 or 4 pups being most common. The pups are dark brown and born blind. The gestation period ranges anywhere from 51-63 days, and the young are born in April or May. The pups will live with their parents in above-ground dens, which could be a hole in a tree, rock formations, brush that has been clustered together, or even sometimes underneath man-made buildings such as barns or garages. The pups do not come out of the den until they are about 5 weeks old. At 3 months of age, the pups will begin learning how to hunt and catch their own food, and by the fall the pups have set out on their own in preparation to breed and raise their own litters by the next breeding season.

Typical Diet:
The diet varies slightly depending on the region, but the grey fox is considered an omnivore (they are also solitary hunters). Grey foxes eat virtually every kind of meat, fruit, vegetable or insect. Small mammals, especially cotton-tail rabbits, are favorites. They are opportunistic foragers, and they use hunting techniques that vary from stalking to dash-and-grab. Their best known technique is the ‘mouse pounce’ (videos of foxes plummeting head-first into snow), which is done by leaping up above the ground and diving, front paws first, onto the prey. The impact stuns the prey, or flushes it, allowing the fox to catch it.

Parasites:
The parasites of grey foxes include the trematode Metorchis conjunctus.

Notes:
Female grey foxes may den in a hollow trees, or dig a den themselves. The den may be as long as 75 feet and can have 10 or more exits.
Vocalizations include yapping, howling, barks, whimpers and screams.

Threats to their safety and well-being:
Grey foxes have several predators, most notably coyotes, followed by bobcats; however, great horned owls, golden eagles, and cougars also prey upon them. They are territorial among themselves, but they may ‘timeshare’ habitat with red foxes, enabling both species to make use of mutually desirable habitat with little conflict.
Grey foxes are not currently threatened as a species, but habitat loss requires them to adapt to living closer to human activity than they normally would (as many animals are being forced to do). As individual animals, grey foxes are also at risk from trapping, hunting, and vehicle deaths. Most appalling, however, is the practice of fox penning, an indefensible and barbaric blood sport which The Humane Society of the United States is working to end. Fortunately, grey foxes living on the Caplan Wildlife Sanctuary in Mississippi, and on other HSWLT sanctuaries, will forever live on land where all commercial and recreational hunting and trapping is forbidden.

None of these images belong to me.
If you spot any mistakes, please tell me.
Also, happy Father’s Day to all fathers out there!