Although hunting was a crucial part of human survival in prehistoric times, it is now mostly a violent form of recreation that the vast majority of hunters do not need for subsistence.
Less than 5% of the U.S. population hunts, yet hunting is allowed in many wildlife refuges, national forests, and state parks and on other public lands. Almost 40% of hunters maim and slaughter millions of animals on public land every year, and by some estimates, poachers kill just as many animals illegally.

Hunting causes a whole lot of unnecessary suffering and death. It has contributed to the extinction of animal species all over the world, including the great auk and the Tasmanian tiger.

Animals shouldn’t have to die just because some humans consider it fun. Animals have as much the right to live as we do. Hunting tears animal families apart, and for animals such as wolves, who mate for life and live in close-knit family units, hunting can devastate entire communities. It also disrupts hibernation and migration patterns; the stress that hunted animals undergo, caused by fear and the loud and unavoidable commotion that hunters make, also severely compromises their normal eating habits, making it hard for them to store the fat and energy that they need in order to survive the winter.

Hunting accidents destroy property all the time and will injure/kill cows, horses, cats, dogs, hikers, and other hunters. In 2006, the then-Vice President Dick Cheney famously shot a friend while hunting quail on a canned hunting preserve. According to the National Shooting Sports Foundation, thousands of injuries every year are attributed to hunting in the U.S.—-and that number only includes incidents involving humans. 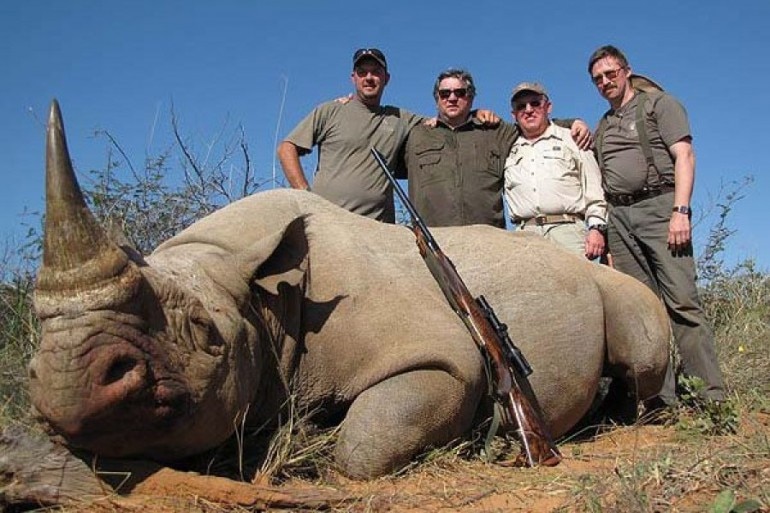 The bears, deer, cougars, foxes, and other animals who are chased, trapped, and killed by dogs during (sometimes illegal) hunts aren’t the only ones who suffer from ‘sport’. Dogs that are used for hunting are often kept chained, or penned, and are denied routine veterinary care such as vaccines and heart-worm medication. Some of them are lost during hunts and never found, whereas others are released at the end of hunting season to fend for themselves in the wild and die of starvation or get hit by vehicles.

Also, animals don’t always die right after they’re shot. Many animals endure prolonged, painful deaths when hunters injure but fail to kill them right away. 11% of deer killed by hunters die only after they’ve been shot two or three times. Others that are hurt but not killed suffer for fifteen or more minutes before they eventually die.
A study of 80 radio-collared white-tailed deer came up with these results: of the 22 deer who had been shot with ‘traditional archery equipment,’ 11 were wounded but not recovered by hunters.
20% of foxes who have been wounded by hunters are shot again. Just 10% manage to escape, but starvation is a likely fate for them, according to one veterinarian. A biologist of the South Dakota Department of Game, Fish and Parks estimates that more than 3 million wounded ducks every year go ‘unretrieved’. Are these not all horribly brutal ways to die?

Sport hunting is unnecessary, cruel, and socially unjustifiable. Thousands of animals every year die as a victim to this ‘sport’. Hunting involves the causing of pain towards animals, and ignores the fact that animals, ourselves included, are living beings that feel emotions, that suffer and enjoy. We all have our own value, regardless of how useful we are to others.

There are various different types of hunting. Small-game hunting, characterized by the size of the prey involved. The victims of this type of hunt tend to be small animals such as partridges, rabbits, turtle doves, various equatic birds, migratory bird species, etc. And there is also big-game hunting, which is characterized by the larger size of the animals victimized by the hunt. In England this mostly involves hunting red deer, but other species of deer are also targeted.

Often, in hunting, they talk about two different kinds of hunters. The ‘good hunter’, who knows and cares for his dogs, who respects nature and never kills weak, ill, or rare animals. And then the ‘bad hunter’, who kills indiscriminately, has no respect for nature, and gets rid of his dogs once they aren’t of any use to him anymore. However, the activity is the same in both cases—-shooting animals for fun. Both cases are equally unjustifiable, regardless of the argument they make. 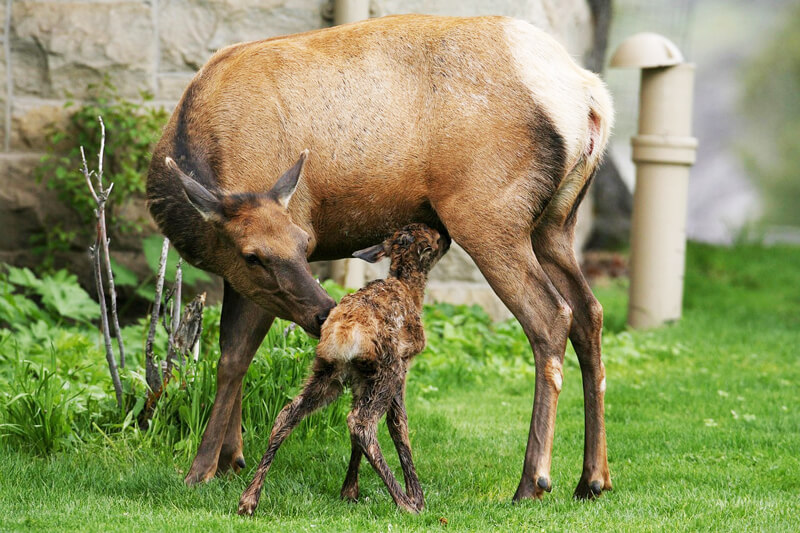 There are many arguments in the defense of hunting:

Hunting is fun. Our entertainment does not justify the death and suffering of others. Of course, an activity like hunting can be considered enjoyable for those who practice it, but not in any way can taking someone’s life for fun be justified. Just like in the case of zoos, rodeos, circuses, etc.

Hunting respects nature. Does it? Stating that ‘hunting respects nature’ tends to imply that the animals who are being hunted have no value, and that their pain and suffering isn’t important because they don’t belong to an endangered species. Judging it by this argument, animals would only have value according to the purpose they serve.

Animals hunt each other. Other animals may show certain behavior in nature, but this doesn’t justify us doing the same. Does the fact that some animals eat each other justify cannibalism? Those of us who can reflect upon the consequences of our actions are inevitably responsible for them, and should bear in mind the interests of other individuals in a fair and impartial way. As such, hunting should be abolished.

They will die anyway. All of us will die anyway, someday. But that doesn’t give anybody the right to take our life away. The fact that someone will eventually die, often from ‘natural’ causes, isn’t a justification for killing them. Hunting causes thousands of deaths every year. There are many ways that we can enjoy nature without harming others. Do not allow suffering and death for your own entertainment. 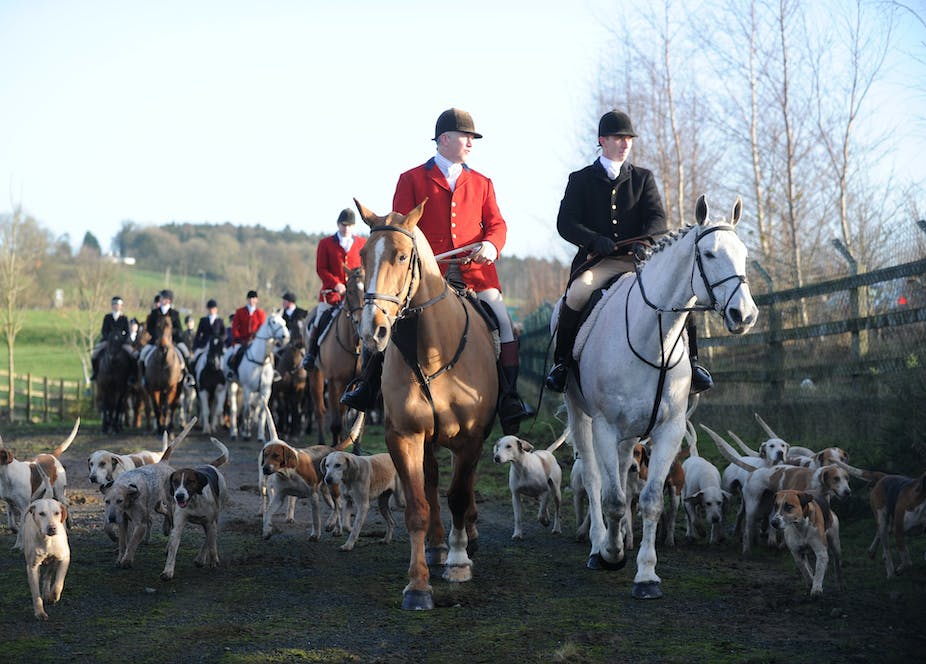 Everybody should respect wild animals. They are living, breathing, sentient beings, and they should be allowed to live their natural lives without human intervention. Hunting for sport is a brutal method of showing dominance over wildlife. Mounting their heads and bodies does not show the respect we should have for the animals in our environment. We would learn to co-exist with wildlife and exotic animals, if only we acknowledged that they, too, have a right to live.

Hunting is a murderous business that causes needless suffering. It is often called a ‘sport’, to disguise a cruel and unnecessary killing spree as a socially acceptable activity.
Despite hunters’ common claim of believing in and following the practice of a ‘fair chase’ code, there is no such thing. With an arsenal of rifles, bows and arrows, and shotguns, among many other weapons, hunters kill more than 200 million animals yearly—-and likely crippling, orphaning, and harassing millions more. The annual death toll in the U.S. includes 42 million mourning doves, 30 million squirrels, 28 million quail, 25 million rabbits, 20 million pheasants, 14 million ducks, 6 million deer, and thousands of geese, bears, moose, swans, turkeys, wolves, foxes, coyotes, bobcats, boars, etc. Hunters also frequently use food and electronic callers to lure unsuspecting animals in front of their weapons. The truth is, the animal, no matter how well-adapted to escaping natural predators she or he may be, has virtually no way to evade death once he or she is in the cross hairs of a scope mounted on a rifle or a crossbow.

Hunting is not conservation. Wildlife management, population control and wildlife conservation are euphemisms for killing—-hunting, trapping and fishing for fun. Natural carnivores are the real ecosystem managers, if allowed to survive naturally. For instance, the reintroduction of wolves to Yellowstone National Park caused ripple effects throughout the ecosystem, with an increase in biodiversity, including a higher occurrence of beavers, several bird and plant species, and the recovery of natural habitat.
Wild animals are not crops. Hunters and wildlife managers, however, treat animals as if they are. A percentage can be ‘harvested’ annually—-to them, wild animals are no different from a field of wheat. This selective mis-management, with its exclusive focus on numbers to be killed, ignores the science that shows that non-humans, just like humans, have similar capabilities of experiencing emotions, and they have families and other social associations built on multi-leveled relationships.

In other words, hunting for sport is wrong and animals have as much right to live as human beings.
Thanks for reading! Also, if you spot any mistakes, please tell me :). No blog is perfect. Comment your views about hunting!
(Also, don’t get me wrong, hunting for necessary purposes is an obvious and necessary part of our culture, but please don’t treat animals with this level of cruelty for entertainment.)
Note: None of these images belong to me.