The horse racing industry began in North America, in the 17th century. It spread across the US as a highly popular sport, although organized racing didn’t exist until after the Civil War in 1868, when the American Stud Book was founded. By the turn of the century, more than 300 racetracks existed in the United States.

Racehorses are now commonly treated as disposable commodities rather than elite athletes, and drugs and injuries are a major part of the harsh sport. As young horses, they are unceremoniously flung into a world of high stakes and physical and psychological stress, and if they are unable to achieve the expectations of owners and trainers, they are then cruelly discarded. Racehorses across the country who no longer produce satisfactory results are sent away to slaughterhouses to be killed. The Thoroughbred-racing industry sends about 10,000 horses to slaughter annually. Horses who have stopped winning races or are too injured to go on running are often sold at auction, crammed into vehicles designed for transporting cattle, and then starved for more than 24 hours till they have reached the slaughterhouse.

Horses often begin training, or are already racing, before their skeletal systems are fully developed. This results in frequent injuries. They are often woefully unprepared to handle the pressure of racing on hard tracks at speeds of more than 30 miles per hour, while being constantly whipped by the people who they carry on their backs. Many horses are raced so often that their joints, bones, and soft tissues suffer irreparable damage.
Trainers and veterinarians usually keep damaged horses racing instead of letting them recover from their injuries, by pumping them full of legal and illegal drugs to hide pain and control inflammation. This leads to an incredible amount of breakdowns, because without the drugs the pain of their injuries would have prevented the horses from trying to run. These people are doing everything they can to make their horses faster. One trainer was suspended for using a drug similar to Ecstasy on five racehorses, and another was kicked off the racetracks for using clenbuterol and having the leg of an euthanized horse cut off for ‘research’ purposes. A New York veterinarian and a trainer faced felony charges when the body of a missing racehorse wound up at a farm, and authorities established that her death had been caused by the injection of a performance-enhancing drug.

Racehorses suffer intense stress from the time that they are weaned. From their being separated from their mothers at six months of age, their being broken in at 18 months, and their enduring the loud noises, the bright lights, and the daily running on the track by the time they’ve reached two years of age, the amount that they suffer isn’t just physical.

Drugging horses to enhance their performance is a common practice in the horse racing industry. Horses are often made dependent on the drugs that their veterinarians and trainers provide. Racehorse trainers sometimes give the animals drugs for hypothyroidism, to speed up their metabolisms, or furosemide (Lasix), a diuretic that stops bleeding in the horses’s lungs during intense exercise, thus allowing them to push through exhausting training sessions and races. But, while the drugs may relieve such symptoms of exercise-induced pulmonary hemorrhage (EIPH, a serious and life-threatening illness found frequently in young horses), there are problems that they fail to treat.

Lasix and other legal drugs also work to mask other drugs, perhaps illegal, that might be in the horse’s system, so that it appears that they haven’t been fed anything that would make the race ‘unfair’. It also dehydrates the horses, forcing them to lose weight, and thus to run faster. Lameness is often treated with painkillers, and horses are forced to continue running with their injuries temporarily numbed, causing further damage to their legs. 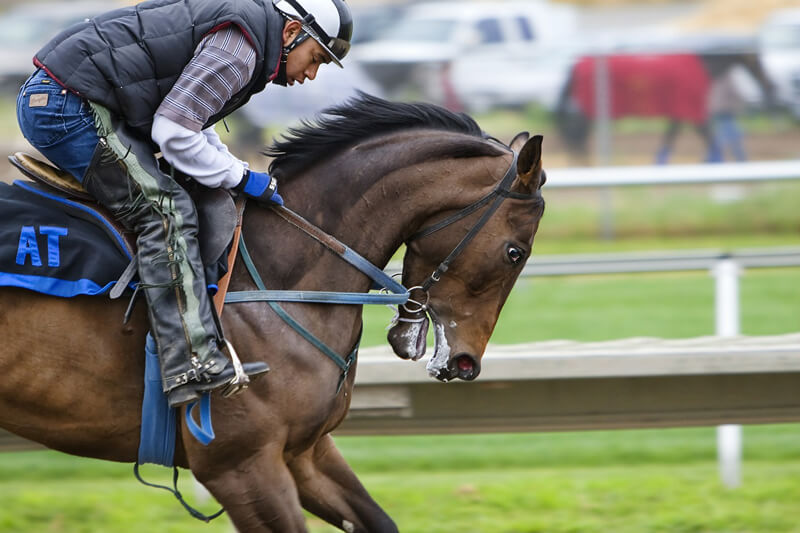 Most racehorses bear their stories of cruelty on their bodies, such as the scars that are often found on their legs, results of being administered liquid nitrogen, to increase blood flow in sore muscles. This process, ‘freeze firing’, is meant to soothe aching muscles, but often results in deep surface wounds. Other injuries that are common among racehorses include exercise-induced pulmonary hemorrhage; i.e., blood in the horse’s lungs, causing them to literally drown in their own blood. Lameness, which includes sprains, abscesses, strains, etc., and other injuries such as bowed tendons, shin splints, and fractures.

When horses ‘aren’t of any use’ any longer, they seldom retire to pastures. Horses who are being transported to slaughter are sometimes placed in double-decker trucks that are too low for them to stand up fully straight in. They often end up in slaughterhouses in Mexico, Canada, or Japan, where they are turned into glue and dog food. Their flesh is also exported to countries such as France and Japan, where it is considered a delicacy. Most horses who are sent to such facilities endure days of transport in the small, cramped spaces of the trucks, where they are deprived of access to food and water.

Owners do not want to spend money on painkillers, so an animal with a broken leg or other injuries will have to suffer the entire trip without any relief.  Injuries are a common sight during transport, not only because of formally attained wounds, but because horses (whose bodies aren’t designed for stability) often lose their balance while standing in the trucks. Since horses must be alive when they arrive at the slaughterhouse, in order to be used for human consumption, even animals in excruciating pain will not be euthanized.
When unloaded from the trucks, it is not uncommon to see injuries occur, such as broken legs, when the horses attempt to descend the steep ramps that are not meant for that particular kind of animal. Horses are subject to the same slaughter method as cows, but since horses are generally unaccustomed to being herded, as cows are, they tend to thrash around in order to avoid being shot by the captive-bolt gun, which is a device that is supposed to stun the animals before their throats are cut. Their slaughter, which includes the killing of foals despite the fact that it is illegal, is largely unregulated.

Recent reports of deaths among active thoroughbred horses have sparked serious concern for their welfare. Twelve died in New York in July alone, with 11 deaths occurring between July 8th and 18th. More than fifty racehorses have died or been euthanized throughout New York’s 11 racetracks since the beginning of 2019, according to data compiled by the state. After the reporting of 30 horse deaths at Santa Anita Park between December and June, Los Angeles is considering becoming the first major city to ban, not just gambling on horses, but the entire sport altogether.

Overall, horse racing tends to be a cruel, violent, and inhumane sport, as are many other sports involving animals. I urge you not to attend horse races, and perhaps try to educate more people on the cruelty that these animals endure.
Note: None of these photos belong to me. And if you see any errors in the text, please inform me. Thanks for reading!